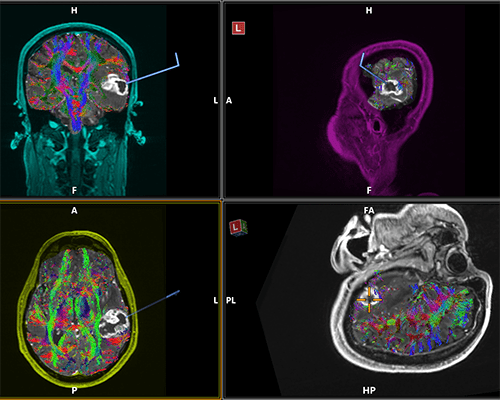 A malignant brain tumor is the most life-threatening of neoplastic (cancerous) diseases. HOWEVER the most common “brain tumor” is actually a meningioma and is almost always benign. Other brain tumors are somewhere in between. We can determine a great deal based on a tumor’s appearance by MRI (and CT), such as the likely type, location, risk factors and best treatment.

The “real” brain tumors are those that start in the brain, as opposed to the coverings of the brain or from another part of the body. These brain tumors form almost exclusively from supporting brain cells, called glial cells, and not the neurons themselves. The most common tumors, known as astrocytomas, come from a cell called an astrocyte.

The most common astrocytoma is called the glioblastoma multiforme or GBM. The tumors are collectively called gliomas. Gliomas in adults share an important characteristic that is difficult for everyone, doctors included, to understand; they are a diffuse disease. This means that the tumors are not completely concentrated into a ball but send out cells into the entire brain, far away from the main focus of the tumor. This is NOT visible on an MRI scan. Therefore, gliomas in adults can not be cured with surgery; surgery is a focal therapy and the disease is diffuse. A surgical cure for an adult glioma, even in the best cases (small tumor in a silent part of the brain), is rare, if not impossible. Other focal treatments, such as Gamma knife, fail for the same reason. That being said, most brain tumor surgeons have patients who have beat the disease. These patients have needed a combination of technically excellent surgery, radiation and chemotherapy. The technical aspect of the surgery is still crucial, even if a surgical cure is not likely, because you need a surgeon who will remove as much of the tumor as possible without causing new, permanent or disabling deficits.

“Other” brain tumors, such as meningiomas or hemangioblastomas, have a high surgical cure rate. Size and location are the determining factors for surgical curability and risk. For example, a meningioma over the middle of the frontal lobe can almost always be cured, whereas a meningioma at the base of the skull, wrapped around the carotid artery and the nerves to the eyes, cannot be cured. Luckily, meningiomas do not grow steadily and may lay dormant for years. One can live with a relatively benign tumor but it is important not to let them become life-threatening.

Meningiomas can threaten one’s life by causing a seizure at the wrong time (such as while driving) or by compressing the brain (even if the tumor grows slowly, there comes a point at which the brain can no longer tolerate the size of the tumor).

Selecting the right surgeon is crucial to minimize one’s chance of brain damage during a curative operation. Complications from meningioma surgery occur in several related ways: seizures, loss of nerve function or stroke. The tumors push into the brain and may steal arteries and veins from the brain or envelop the nerves coming from the brain to the eyes and face. These risks can be greatly reduced with an experienced surgeon.

Q: The tumor is pea sized: can’t you get around it and remove the whole thing?

A:Surgery may remove all of the abnormality seen on the MRI scan, especially if it is caught early and is in a part of the brain that tolerates surgery, but there will still be microscopic cells throughout the brain that will persist.

Q: What is the point of brain surgery for a glioma if you can’t cure it?

A:Brain surgery for gliomas accomplishes two things: 1) establishes the exact diagnosis (what type of glioma is it) and 2) removes as much of the tumor as safely possible to reduce the total number of tumor cells left to treat (cytoreduction) and to relieve pressure on the surrounding brain

Q: Will removing the tumor cause brain damage?

A:Tumors don’t think. Therefore, the mass of tumor you see on an MRI can be removed as it has no function. However, damage to the functioning brain is common with tumor surgery by one of several mechanisms:

Location: Some areas of the brain tolerate surgery much better than others, because the functions they serve are redundant, as other parts of the brain can do the same thing. These areas are known as “non-eloquent” and include the anterior temporal lobes and the anterior frontal lobes. Furthermore, if getting access to the tumor requires going through normal brain, damage can occur.

Margin for error: There is an ill-defined interface between the tumor and the functioning brain. The tumors blend into the brain without a well defined border. Removing some of this border tissue with the tumor can result in new damage.

Stroke: During surgery to remove the non-thinking tumor, a normal artery or vein may run through the tumor and, if removed with the tumor, will cause a stroke in the normal brain nearby.

Q: I don’t want new damage if you can’t cure it, so is surgery even worth it?

A:Surgery is usually worth it for diagnostic purposes. We are able to analyze the tissue and relieve pressure on the surrounding brain. It would not be worthwhile if surgery results in issues such as permanent paralysis or inability to speak etc.

Q: What methods do you take to prevent new damage?

A:Modern technology in the operating room greatly reduces risk and enables us to make precise incisions and safe approaches to tumors. Dr Watson is known for a technique known as “sub-pial dissection” that allows him to preserve most of the blood vessels, arteries and veins in and around these tumors to prevent stroke.

Q: If you have a glioma, do you always need other treatment besides surgery?

A:Sometimes the tumor turns out to be low grade (grade I or II out of IV) and all we need to do is watch it for re-growth after surgery.